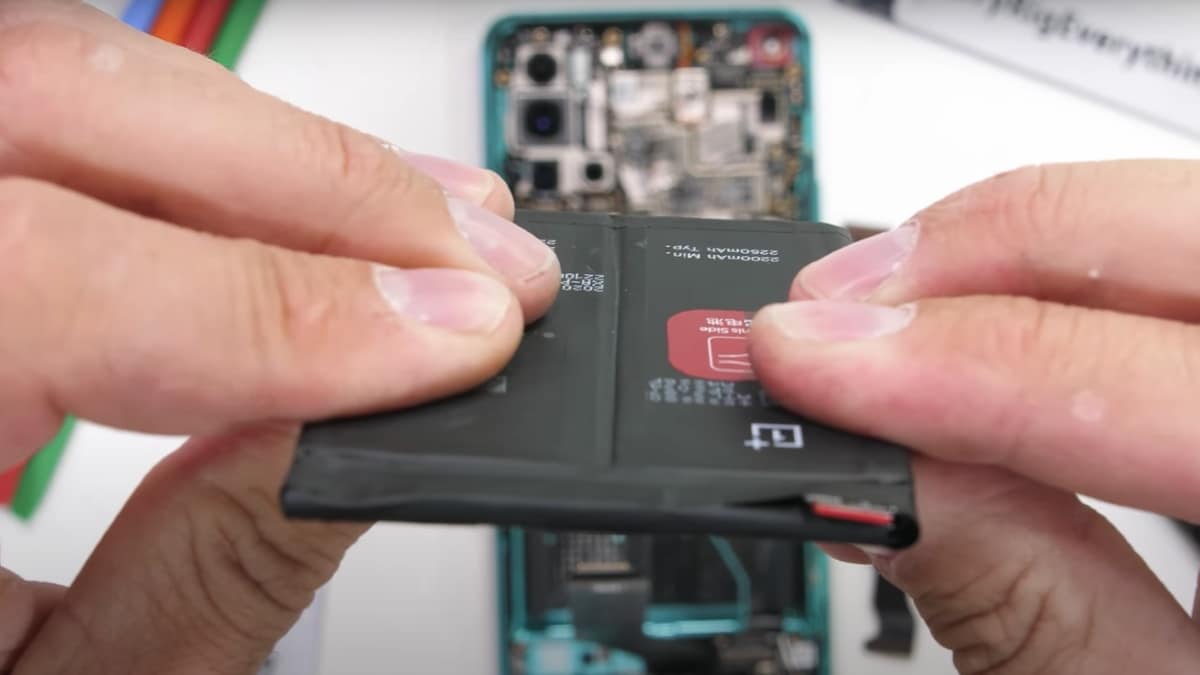 OnePlus 8T teardown video has been released by YouTuber Zack Nelson of JerryRigEverything. It gives us a detailed look at the smartphone’s dual-battery configuration. The teardown follows a durability test under which the latest OnePlus phone went through rigorous scratch and bend tests. The phone was found to gain scratches at level six of the Mohs hardness scale. OnePlus 8T was launched as the newest member of the OnePlus family just earlier this week. The phone features quad rear cameras as well as a hole-punch display.

The teardown of OnePlus 8T begins by traditionally unscrewing over a dozen of Philips screws. However, the key highlight that makes the new OnePlus phone so different from its predecessors is its dual-battery configuration that enables 65W Warp Charge fast charging. This is a significant upgrade over OnePlus 8 that had a single 4,300mAh battery with Warp Charge 30T support.

Nelson mentioned in the video that the battery pack of OnePlus 8T, at first glance, looks identical to the one featuring on existing OnePlus phones. However, a crease is visible at the centre that depicts two different halves that are packaged as one. Each of the halves have a 2,250mAh battery to bring a total capacity of 4,500mAh.

“Most phones don’t charge faster than 30 watts. So, it’s probably safe to say that charging a singular battery with more power than that might cause the battery to explode or catch fire. But doubling up the batteries allows for double the power to be utilised,” Nelson said in the video.

The teardown also revealed that OnePlus 8T doesn’t have any waterproofing on the speaker, though a rubber ring has been warped around the USB Type-C port to resist water. There are also foam balls inside the speaker box to help bolster the audio output. Further, the copper cooling system on OnePlus 8T extends beneath the battery. This may help enhance thermal management while charging to some extent.

Is OnePlus 8T the best ‘value flagship’ of 2020? Comment below

Sacking coach may not deliver an finish to Barcelona’s woes