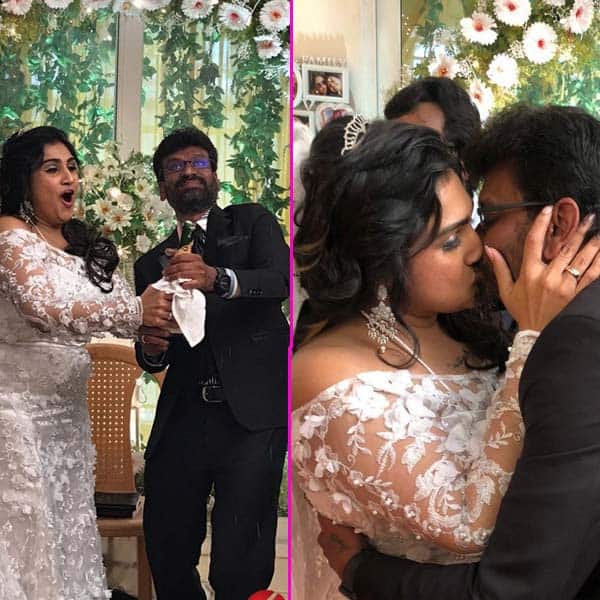 It looks like happiness and marital peace was short-lived in the marriage of Vanitha Vijayakumar and Peter Paul. As per a report in India Glitz, the actress has thrown her husband out of the house. On June 27, 2020, Vanitha Vijayakumar and Peter Paul tied the knot in a hotel in Chennai. Now, reports in India Glitz are saying that Vanitha has thrown her husband out of the house. It seems he was consuming excessive alcohol and misbehaving with her. Everything started in Goa. Some time back, Vanitha Vijayakumar, Peter Paul and their daughters had gone to Goa for a vacation. It seems Peter started drinking a lot in the holiday paradise. He began behaving badly with her. This led to Vanitha allegedly beating him up.

The couple got back to Chennai but his drinking did not stop. Frustrated, Vanitha beat him up and threw him out of their residence. Producer Ravindar Chandrasekaran confirmed the news in a cryptic manner on social media. He was one of those who had opposed the wedding of Peter Paul and Vanitha Vijayakumar. Well, just after Peter Paul tied the knot with her, his first wife, Elizabeth Helen lodged a complaint with the police. She said that he was not legally divorced, so this new marriage stands null and void.

His son had alleged that Peter Paul was an alcoholic and had even been to a rehab centre. It seems he tried to escape from there, and was even reprimanded for the same. He said that he fell in love with every woman he worked with on projects. Some celebs like Lakshmi Ramakrishnan and Kasthuri had opposed the marriage. They told Vanitha to think about her daughters before tying the knot with Peter Paul. Vanitha had sharply rebuked them on social media. She even went to the cops and said that the legal issues between Peter and Elizabeth were sorted. We wonder how things will move on from here.